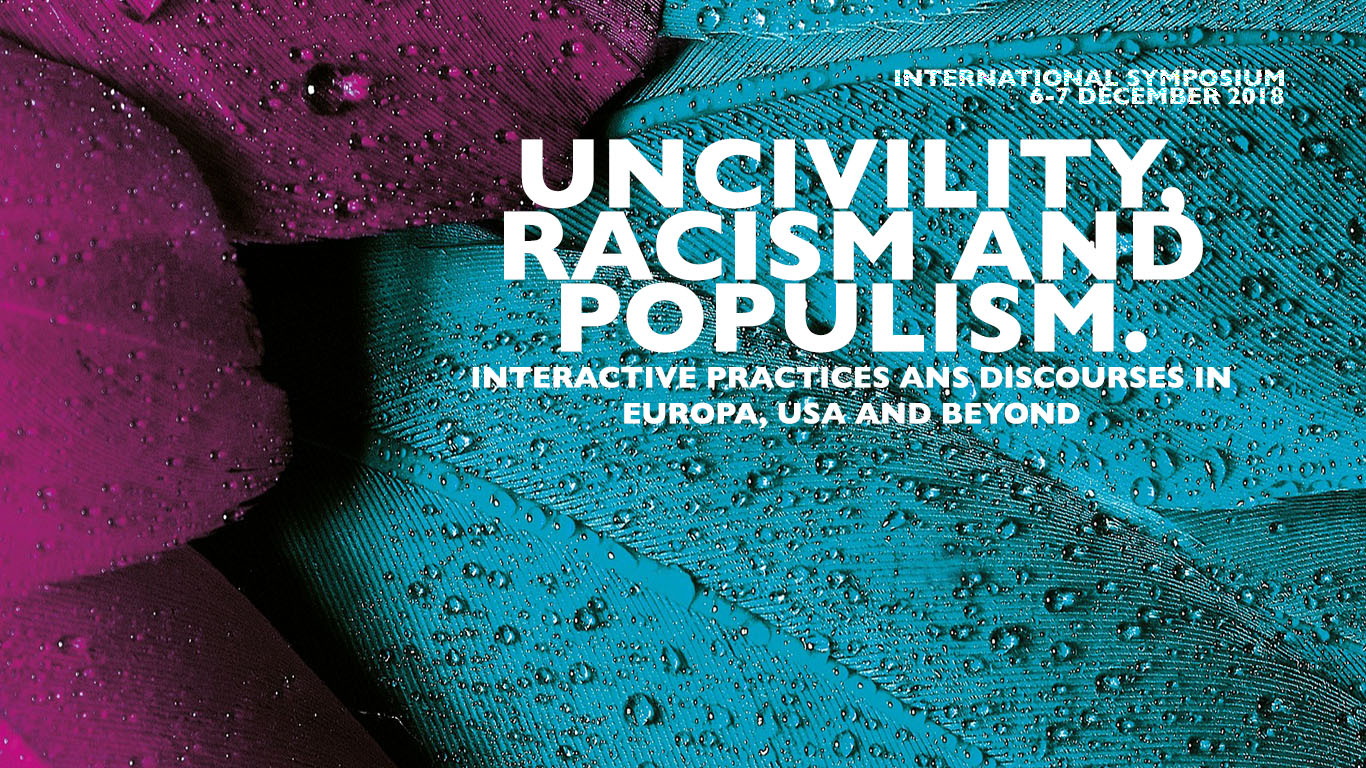 UN-CIVILITY, RACISM AND POPULISM: INTERACTIVE PRACTICES AND DISCOURSES IN EUROPE, USA & BEYOND. 6-7 DECEMBER 2018

This two-day interdisciplinary symposium aims to discuss practices of un-civility from the point of view of humanities and social sciences. The main aim is to further in-depth, critical discussions on the ideas and concepts related to uncivility (including, inter alia, civility/incivility, civic norms, normativity, politics & morality, racism/exclusion, and populism) against the background of systematic and empirical, nationally-specific and comparative studies across various practices, public spaces and genres. We aim to focus on contemporary practices of uncivility yet while considering these from not only a synchronic look but also a variety of historical contingencies and path-dependencies.

We view uncivility as an array of mediated (online and offline) discursive as well as physical and material practices which are often undertaken as part of pronounced strategies of political action and whose common aim is to undermine the values of democratic society. While using various modes of political communication and political action, practices of uncivility effectively spread authoritarian visions along with imaginaries of the social status quo that is often based on racial prejudice as well as social, cultural religious and ethnic exclusion.

We see the in-depth exploration of phenomena related to uncivility as one of the keys to understand the current upsurge of racism and populism in Europe, USA and beyond. We particularly target the ongoing radicalization of the extreme modes of political action (e.g. via growing number of radical groups) as well as the by now endemic normalisation of the politics of exclusion in and by the political mainstream along with its endorsement of nationalism, racism, anti-Semitism, Euroscepticism and Islamophobia. Crucially, we view the above processes as profoundly interconnected through various interactions within and beyond the online/offline public spheres as well as in the traditional political realm and in organizations satellite to politics.

Our key aim is, therefore, to provide both the big picture and to explore uncivility ‘on the ground’, in a variety of practices and spaces. In doing so, we do not want to treat uncivility as a certain type of strictly pre-defined practices of social and political behaviour that are specific for certain groups (e.g. extremists), or as actions located strictly at the specific poles of the socio-political and ideological spectrum. On the contrary, we explore uncivility as a certain array and continuum of evolving practices which by now extend across the entire political spectrum including, very prominently, along the axis from the radical right, through right-wing populist movements and parties, and up to mainstream (esp. conservative and right-leaning) political parties and groups.

Through the symposium, we wish to bring together leading international scholars working on both theoretical and empirical analyses of uncivility in such areas as: communication and media research, critical discourse studies, political science and political sociology, sociology of religion, social geography, political psychology, social history, and ethnic and migration studies. We thereby wish to bridge several existent research initiatives and projects currently conducted on the topic in Sweden, Europe, USA and beyond as well as to debate future research agendas in interdisciplinary and cross-national critical research on uncivility.